Teaching English to the youth of China..... 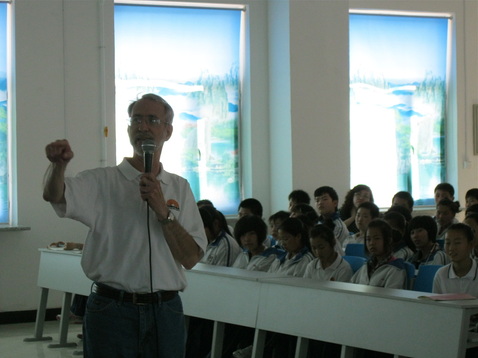 The journey to China started in 2007 when I was invited to join a  tour hosted by longtime friends working there.  After learning about the possibility of returning as a paid English teacher, and being retired, I made the momentous decision October 2008 to take on the challenge, not knowing exactly what changes I would encounter except that I would be in a different country and different culture.  Up to that time, never did I in my wildest dreams ever think I would be on the other side of the world developing an entirely new career.....and that in my retirement!

February 2009 saw the dawning of a new day for me as I flew to China to take up my new responsibilities at a university in Harbin.....with rewards far greater than I had imagined.  After a year back in the States, I gladly returned once again the end of February 2011, this time to teach at Qiqihar Univerisity.  People both sides of the Pacific ask me how long I'll be here this time.  The only reply I can give is, "As long as God decides!"

My China adventure is chronicled in a series of blogs, beginning with http://www.jiminnorthchina.blogspot.com/.  The eventual blocking of this blog necessitated the next one:  http://jiminchina.livejournal.com/.  And now I begin a blog at this site because it is more versatile and easier for uploading pictures.  For any latecomers, the previous blogs can still be viewed.  Enjoy!